Brig Arvind Nilkanth Jatar, son of Bhausaheb, and grandson of Shriram Jatar, was a heroic figure and one that the Jatar family is very proud of. He won the Maha Vir Chakra, India’s second highest military honour, for his bravery and the details are given on the Bharat Rakshak site.  He was popularly known as “Baba” in the family.

Here is another link to his citation, from a government of India site. And this one from an official government site: List of Mahavir Chakra Awardees.

The list of MVC winners is also given here, in the Wikipedia.

Tall and with an almost pink complexion, Baba had wide dark eyes and curly hair. He was slim and remained so until the end of his life.

This is how it all happened:

On 8th April 1948, 19 Infantry Brigade started its advance to Rajauri MR Square Sheet No 43K7. The Central India Horse less two squadrons was to support the 4 DOGRAs for the attack on Barwali Ridge Square 3704 Map Sheet No 43K8. Captain Jatar volunteered to go with the Company in the attack as it was felt that without an Armoured Corps officer, successful support would not be possible. Captain Jatar carried the 46 set on his back because the operator has had sprained ankle while crossing the river. When the right forward company of the DOGRAs was half way upto the objective they were held up by heavy enemy medium gunfire from the right ridge. Without any regard to his personal safety, this officer moved across the bullet and mortar swept river to the left forward Company of the DOGRAs. While crossing the river, his wireless set was hit by a burst of medium machine gun fire. This officer once again did a most courageous thing by standing up in full view of the enemy and indicating targets by means of a handkerchief tied to the wireless mast. It was solely due to his signalling that very heavy close support of the tank fire was given to the DOGRAs for five continuous hours, which made it possible for them to take the objective.

Throughout the battle, this officer conducted himself with superb courage and with no regard to his personal safety. It was mainly due to this officer’s initiative and coolness and shattering fire that tanks were able to give a most needed close support to the DOGRAs. On 10th April 1948, Captain Jatar was in the leading tank. At Nerian MR Square 3903 Map Sheet No. 43KB, the tanks had to leave the road and advance along the riverbed of Tawi. Captain Jatar crossed the river three times ahead of his tanks and on all these occasions he was under automatic fire. He was first to reach Chingas MR Square 3609 Map Sheet No. 43K8.

Once again, this officer displayed initiative, courage and devotion to duty. By walking in front of the tank, he saved the tanks from getting bogged in the river. On 12th April 1948 during the advance to Rajauri this officer again crossed and re-crossed the river Tawi 11 times, all the times ahead of the tank. After Rajauri was captured at 1845 hours this officer was ordered to go back about 2 ½ miles and pull out and recover two tanks, which had bogged in the river. With extreme boldness and noteworthy leadership this officer got the tanks out and brought them to harbour at 0130 hours. It was mainly due to this officer’s dauntless determined efforts that all ranks reached the objective. The enemy was surprised that he left behind hundreds of Indian Nationals, mostly women who had been collected in the village of Gordan Bala MR Square 3629 Map Sheet No 43K7 to be taken away and may be to be butchered. The enemy also left behind ammunition and arms. The hurry in which they left proves that they never expected the tanks to move across the treacherous bed of the river, which was full of boulders. The following extracts from the Special Situation Report No 18/D/GS (I) HQ JAK Force dated 15 April 1948, which relates the work of Captain Jatar, Quote “I consider advance was only made possible by excellent navigation by leading tank”

There is another site which mentions Brig Jatar’s heroism and that is this one. That site also talks about Brig Jatar’s cousin Madhukar Shantaram Jatar, who received the Veer Chakra. I will be writing about him soon.

Here is a list of Brig AN Jatar’s medals: 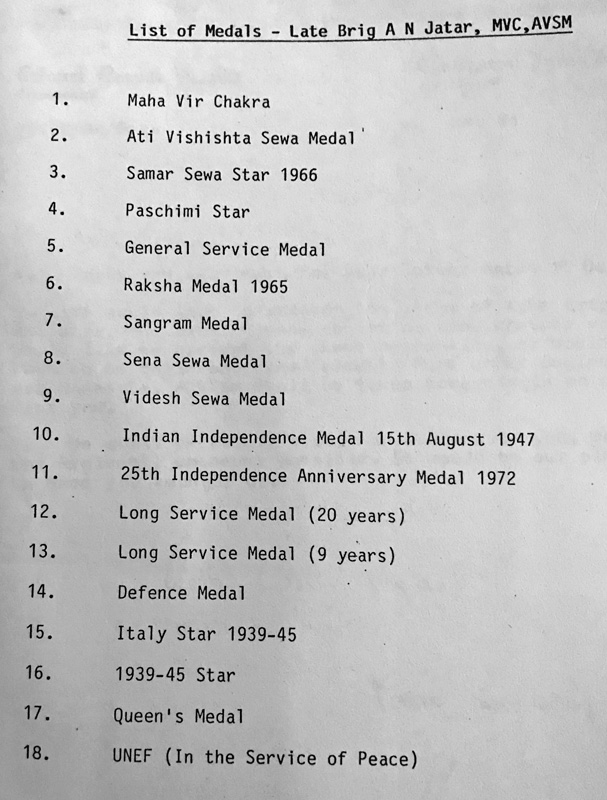