Today I am writing about a star in the history of the Jatar family which shone brightly, in fact, dazzled, and streaked across the firmament much too soon.

Chandrabhaga, popularly known as Chani, was born in 1907, as the third daughter of Bapurao, i.e. KS Jatar, who was the eldest son of Shriram Bhikaji Jatar. (link to his family tree). Chani was younger than Kamalatai Thakur and Anasuya Garde, whereas she was older than her sister Banutai Inamdar and Sushilatai Nanal.

Chani was very good at studies and received the Radhabai Paonaskar scholarship and a silver medal for standing first among girl students at the Matriculation exam held in March 1924. She was probably studying END_OF_DOCUMENT_TOKEN_TO_BE_REPLACED

It is Memorial Day Weekend in the USA, so this memoir is timely in remembering my late father, Wg. Cdr. Madhukar (Mickey) Shantaram Jatar, VrC, VM. This is also a salute to all the members of the Jatar and extended family who have served illustriously in the Indian Armed Forces over the past decades.

My father was the second of four sons born to Dr Shantaram Kashinath Jatar (Babu Kaka) and Mrs Malatibai Jatar. I don’t recall much of his childhood except that he graduated from Nutan Marathi Vidayala in Pune and played competitive cricket as a pace bowler.

Kumudini Jatar was the daughter of Balasaheb Jatar and granddaughter of Shriram Bhikaji Jatar. She was married to Shankar Rao Borgoankar and they settled in Hyderabad.

She went to High School in Nagpur, in CP and Berar province of British India, Later on, along with her first paternal cousin, Banutai Jatar Inamdar, she attended Fergusson College in Pune for a couple of years. She got married in Kulbarga (formerly Gulbarga, in Nizam’s Dominion) Karnataka in 1927.

She was named Parvati by the Borgaonkars, I remember that because Mai, wife of my father’s youngest uncle, Gopalrao (Kaka), who brought up my dad, used to call her by that name! I was not aware of very many weddings taking place in a bridegroom’s hometown but that was my parent’s life! Both of my parents were raised in ‘fatherless’ homes by their uncles in the paternalistic society of India.

My mother underwent 7 pregnancies in little more than a decade. I was the only son in the middle of 4 sisters as we grew up. Both of our grandmothers lived with us because my parents were their only children. My paternal grandmother was a ‘Sowli’ lady. She had my father in her teens and her husband died a few months END_OF_DOCUMENT_TOKEN_TO_BE_REPLACED

The following write-up and photograph has been contributed by Chandu Jatar, the great-grandson of Shriram Bhikaji Jatar.

The 11th of April, 2020 marked the 65th death anniversary of dear Annakaka (Capt. Damodar Kashinath Jatar) the commander of Air India International’s ill-fated Constellation aircraft KASHMIR PRINCESS which crashed in the South China Sea near the Great Natuna Island, as a result of sabotage.

I presume you may have already read the excellent article written by Anurag Inamdar highlighting the politics behind this tragic accident. Kudos to Anurag for his massive research and effort he put in to unravel some of the mystery behind the accident.

I, Bhalchandra Shantaram Jatar, better known as “Chandu” am the eldest of the 4 sons of Dr. Shantaram Kashinath Jatar (Babukaka).  Babukaka was the second son of Kashinath Shriram Jatar (Bapurao) and the older brother of Annakaka. On the day of the tragedy, END_OF_DOCUMENT_TOKEN_TO_BE_REPLACED

This is Shriram Bhikaji Jatar’s Will. It was the 1800’s but our great grand-father (for some, their great-great-grandfather) made a Will. This is telling, considering that many people today in the 21st century don’t bother to do it.

Shriram wrote this when he was unwell. The five salient points from the Will are:

The actual Will is reproduced here in image form. END_OF_DOCUMENT_TOKEN_TO_BE_REPLACED

Brig. Raghunath Jatar, the husband of the late Neelakshi Jatar (nee Bal), has brought out a booklet filled with poignant memories of his late wife Neelakshi, who passed away from cancer over a year ago. Family and friends have contributed with their own thoughts and memories. 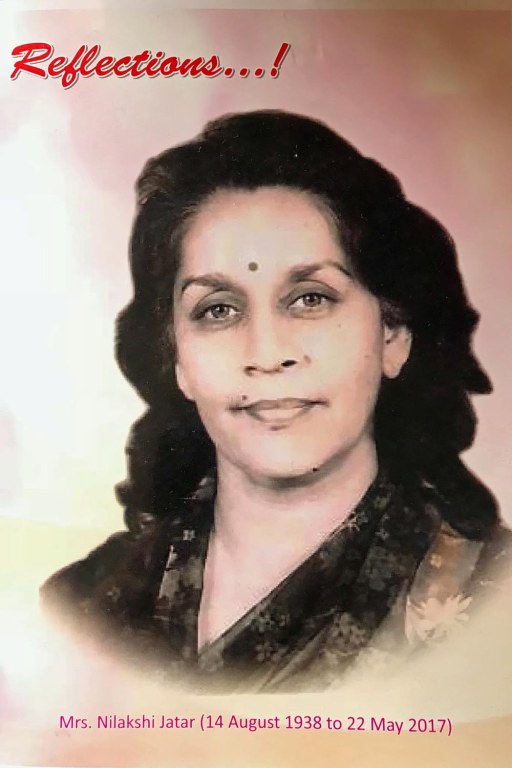 Neelakshi Jatar’s life is encapsulated here in this book. She was a teacher, writer and END_OF_DOCUMENT_TOKEN_TO_BE_REPLACED

Today is the death anniversary of Bal Kaka (Balkrishna Jatar), the son of Abasaheb, and the grand-son of Shriram Jatar. We, the descendants of Shriram Jatar, have a WhatsApp group in which we often share memories. And today Ranjit, the son of Brig. R.V. Jatar, and the grandson of Abasaheb and the nephew of Bal Kaka, started the conversation by telling us of his memories of his uncle, and posted two of his photos.

Most of us here knew him.

He was among the warmest people we all knew. A big heart. Witty. A good sport. Twinkling eyes even when occasionally he got annoyed. Wiling to help.

A great DNA for all of us to follow. Except when he would sit next to you in a movie theatre and snore. ( Remember those days when going for a movie was a BIG occasion?)

He would love it if today evening we raise a toast. Soda with soda, or soda with ….

RIP Bal Kaka!! Hope you are enjoying your pipe ..unless you have upscaled to cigars….and enjoyed the IPL.

There were other comments and they are END_OF_DOCUMENT_TOKEN_TO_BE_REPLACED

This post is a tribute to an unsung hero – the brother of Mohini Kirtane and Vidya Chand – Vijay Joshi . He died 50 years ago – on the first of September 1965. He gave up his life for INDIA .

Vidya, Mohini and Vijay are the three children of Nalini (Nanutai) and MK Joshi. Nanutai was a Jatar girl, the daughter and only surviving child of Radha (nee Vatsala Mainkar) and Vasudev (Appasaheb) Jatar. Appasaheb was the son of Kashinath Jatar (Bapurao), who was the eldest child of Shriram Bhikaji Jatar. This family tree will place him well.

This is a tribute to him in the Times of India by the brother in law of Vijay (Vijay’s wife Sandhya’s brother). Sandhya was a Gadgil before marrying Vijay. END_OF_DOCUMENT_TOKEN_TO_BE_REPLACED

There is some interesting information on Capt. D.K. Jatar’s last journey (our esteemed ancestor Annarao, the first civilian to receive the Ashok Chakra for extraordinary bravery) in a book by RM Lala (Beyond The Last Blue Mountain – A life of JRD Tata).

D.K. Jatar was Bapurao’s youngest son, known as Annakaka in the family. Annakaka was the grandson of Shriram Bhikaji Jatar.

The excerpt shown here is about the Air India plane called the Kashmir Princess which crashed; the plane which was supposed to be carrying the Chinese Premier – Chou (or Zhou) En-Lai. It was piloted by Capt. Jatar.

This the cover of the book. 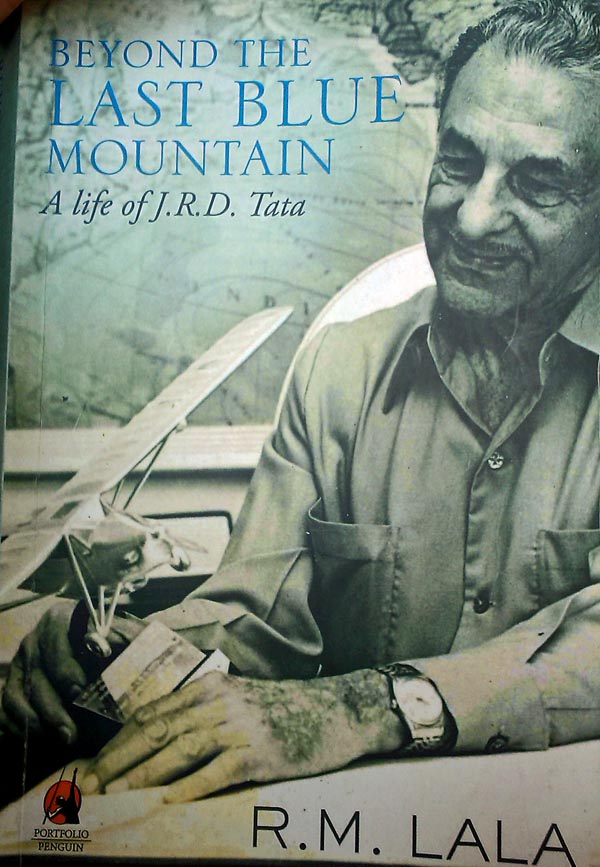 This is the start of the write-up, on page 153. It is the behind the scenes explanation as to END_OF_DOCUMENT_TOKEN_TO_BE_REPLACED

A poignant poem by the eldest son of Shriram and Janaki, KS Jatar, otherwise known as Bapurao to his mother Janaki (also known as Aaisaheb) after she passed away in 1912, when she must have been nearing the age of 70. Janakibai or Aaisaheb survived for almost 20 years after her husband (Shriram) died at the age of 61, and looked after her large family of four sons and three daughters with a lot of love and care. Her loss was keenly felt by the whole family.

Her eldest son was 41 when he wrote this poem but even as a man nearing middle age, he was broken after his mother’s death as can be seen from this poem. He writes of the tragedy of her loss, remembers the variety of food she used to cook, and the love and support she provided to various members of the whole family.

A particularly poignant moment in the poem is when Bapurao writes that “you” (meaning his mother Janaki) promised to look after your daughter-in-law after “Bhau” went abroad, but your untimely death dashed all hopes. Here he is referring to Bhausaheb’s first wife Bhagirathi alias Durga, who unfortunately died prematurely in her early twenties.

This poem is on two sheets of paper written in Marathi and posted in two separate images. People from the Jatar family are all named here. It is sure to bring a tear to your eye. END_OF_DOCUMENT_TOKEN_TO_BE_REPLACED