During the old days, taking a photograph was an event. People got dressed up and went to the studio. I can imagine how excited these lovely ladies must have been when they decked up in their finery and trooped to the studio.

This photo was probably clicked before 1927, because 1927 was the year when Indira Jatar got married.

The ladies on either side of them are Kumud Jatar and Indira Jatar. Kumud Jatar was the daughter of Ranganath Jatar (Balasaheb), the son of Shriram Jatar who passed away very early when Kumud was a child. Later, Kumud married Shankarao Borgaonkar of Hyderabad. Indira Jatar was the daughter of Bhausaheb, and married Shri Bhalchandra Balkrishna Bhajekar. Thus, Kumud and Indira were the first cousins of Chandrabhaga and Sarojini.

I cannot help but wonder what these sisters and cousins talked about. They led stable and secure lives and had loving families so their hopes and dreams came true. Except for Chani, ofcourse.

The following write-up was contributed by Padmakar Jatar (known as Papa in the Jatar family) who is now living a happy retired life in Las Vegas. Papa Jatar is the son of Dr Shantaram Jatar (known as Babukaka) and Malti Phadnis and the grand-son of Kashinath Shriram Jatar (Bapurao), who was the eldest son of Shriram Jatar, (link to the family tree of Shriram. )  They had four sons, Bhalachandra (Chandu), Madhukar (Mickey), Padmakar (Papa) and Dinkar (Kumar).

Here is what Papakaka writes:

The photograph below is of the four Jatar brothers in their youth, the four sons of Babukaka – Dr Shantaram Jatar. From Left to Right: Dinkar (Kumar), Madhukar (Micky), Padmakar (Papa) and Bhalachandra (Chandu).

I am very proud of the achievements my father who got 5 degrees including that of the Royal College of Surgeons (UK). My 2 brothers, IAF fighter pilots, were extraordinary – mentally tough like other Jatars: Bhausaheb, Baba, Bhayya, Anna Kaka, Sudhir … the list goes on. And I must mention that my brother Chandu is a very good engineer.

As for me, I left India way back in 1964 and headed to London. It was a struggle because architecture is very sensitive to the economy. I did some sports in the United Kingdom: Badminton for instance. The highlight was that I completed the Glider Flying Course and earned A & B certificates. Then I left for Canada but I didn’t like it there too much.

After about 1-1/2 years, I moved to the USA. I had to start more or less at the bottom of the ladder because they don’t recognize Indian qualifications. After a few years, I passed my licensing exam, which is considered as tough as P.E. and finally I could call myself an Architect.

My work experience has been in Medical projects (35-40 yrs.): Medical planning & preparing construction documents for contractors to build from. I have had all-round experience. I started with manual drafting & later switched to computer drafting/ design. My ambition was to be an all-rounder in work & sports & I succeeded to some extent.

Diwakar Vasudev Jatar, known as Madhav in the Jatar family, was a talented theatre actor. His daughter Mrudula has provided photos from the various Marathi plays that he acted in. See them here in a slideshow:

Madhav was the fifth child of Appasaheb (Vasudev) and Radhavahini (and the grandson of Bapurao and the great-grandson of Shriram Jatar.)

This is a photograph of Brig. Raghunath Jatar and his elder sister Saral Thakkar (88 years old). Usually, she lives in the U.S and in Australia with her two daughters, Padmini and Ashwini. She is presently in India, staying with her younger brother until she is well enough to travel abroad.

The father of these two siblings was Abasaheb, the son of Shriram Jatar. 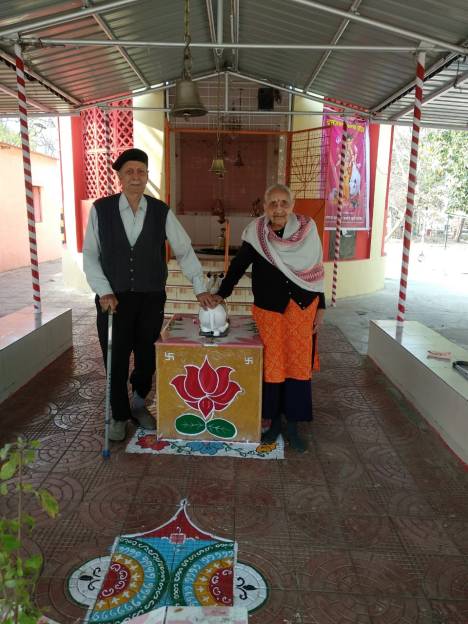 The above photograph was taken by Ranjit Jatar at the Shiva and Datta temple in Armament Colony close to Moreshwar.

Madhav Keshav Mangalmurti was born on the 4th of May 1938. He completed his MSc in Mathematics in 1958 and joined the Indian Foreign Service in 1961 and had a very successful career. He was posted in Indian missions abroad in several countries and was Ambassador to Cuba, Switzerland and was High Commissioner to South Africa. He retired in 1996.

Madhav Mangalmurti’s father was Justice K T Mangalmurti who had worked with Bapurao Jatar (the eldest son of Shriram Jatar and the elder brother of Abasaheb) in Amrawati. They knew each other well. Here is a link to Shriram Jatar’s family tree.

The Borgaonkar family is the family which Smt. Kumudini Borgoankar nee Jatar, married into. She married Shankarao Borgaonkar and was the only child of Balasaheb Jatar, the second son of Shriram Bhikaji Jatar. Shankarao was from Hyderabad. He and Kumudini had four daughters – Pramila, Saral, Achala and Leela and one son Bal Borgaonkar.

These photographs and information given below was provided by Pramila Desai’s son, Ranjan Desai, the grandson of Kumudini, and great-grandson of Balasaheb Jatar.

The photos below are of the Borgaonkar home in Hyderabad. END_OF_DOCUMENT_TOKEN_TO_BE_REPLACED

This is a photograph of six powerful women of the Jatar family — Anjali Jatar, the wife of Balkrishna Jatar, who was the son of Abasaheb, and grandson of Shriram Jatar.  He was popularly known as Bal Kaka. The other power women are Anjali and Balkrishna’s three daughters and two grand-daughters. As you can see from their glowing, confident faces, these are women who have made a difference to the lives of the people around them!

From Left to Right: