I am lucky to be alive. Credit goes to my parents. After I was born, there was an infection to my left hip which needed treatment by penicillin. The antibiotic was apparently not available in India, but as luck would have it, my father, Dr A. K. Talwalkar was in Liverpool, England, doing MCh (considered as the highest master’s degree in Surgical Science, the Master Chirurgiae is an extremely advanced and selective postgraduate/doctoral degree after Master of Surgery that equips an individual with a technical understanding of complex surgical procedures) and my mother Leela was brave enough to take my brothers and me to England by boat in 1946. I got the antibiotic and excellent orthopaedic treatment. This left a somewhat shortened leg but left me basically intact. This defect was eventually fixed in 2009 by hip replacement in the US. END_OF_DOCUMENT_TOKEN_TO_BE_REPLACED

Bhishi is a gathering of people who generally meet monthly and each contributes a small amount towards a fund which goes to the person hosting it. It is a type of kitty party…in other words, it is an excuse to keep in touch on a regular basis.

The women of the Jatar Family (and their descendants) have done a great job in maintaining the bhishi for the last 20 years, and more. It’s amazing that the bhishi includes not just first, second and third cousins (spouses too) but also cousins twice removed. Also aunts and nieces, several times removed. The bhishi has everyone with Jatar blood, or someone END_OF_DOCUMENT_TOKEN_TO_BE_REPLACED

I, Prafulla Talwalkar, son of Leela Talwalkar and Dr Arvind Talwalkar (daughter and son-in-law of  Bhausaheb respectively). Bhausaheb was the son of Shriram Jatar).

I passed my MBBS in 1966 and did my residency at the KEM Hospital in Mumbai. At that time my mother asked me if I was interested in getting engaged or married as there were apparently several people were inquiring about me. I remember a picture of Vishwamitra in Bhausaheb’s house in Neel-Sadan showing Vishwamitra saying no no no to all the women I said the same. Not till I get settled in my life. And my mom left it at that. However each weekend me and my colleagues used to discuss plans for the weekend and many said they are going out to eat पोहे or खिचडी (translation going to see a girl). I used to envy them as I missed eating पोहे or खिचडी.

Then one day, my mother told me I was going to see a girl at the Wellington club on a Saturday when I was not on call. She said Ushamoushi and Suman Dixit have proposed it from Kirloskar family so we have no choice you have to see her and if you do not like her, we will say पत्रिका does not match. Nobody is forcing you to marry, ok. Well I had learned from exprience I cannot win an argument with mom so decided to go with the flow. So we went to the club but no पोहे no खिचडी. Instead we had coffee and cucumber sandwiches and so on. But the girl Suniti was very pretty. इंग्रज़ीत म्हणतात सोन्याला gold सुनीताला पाहून मी झालो clean bowled. So this Vishwamitra said yes yes yes and after going out with Suniti for several months we got engaged and finally got married and that was 41 years ago. Secret of the success of our marriage is when Suniti asks me to jump, I ask how far?

I am a family physician practicing in Mississauga 20 miles from Toronto. I have been in practice for 30 years and now have 5 generations of patients coming to see me. My wife, Suniti is daughter of Mr R.L. Kirloskar and Mrs Indutai Kirloskar. She works as an assistant manager with the Royal Bank where she has been working for 30 years

About the rest of us
So finally did it help that my Dad married a girl from Jatar family, a family of tall people. I am 5 feet 11 inches tall and in shoes I stand 6 feet. Dhruva is 5 feet 11, Nitin is 6 feet 2 inches, Arjun is 5 feet 9 inches I guess we are taller than the average Talwalkar. So take my advice: marry a Tallwalkar and your next generation will be tall.

My youngest son is Arjun‘s wife is Monika Pundalik, daughter of Mr. and Mrs. Pundalik from Delaware USA. They have two sons, Milind and Devan.

Our first son is Dhruva. He is married to Anisha Bhandari.

My second son Nitin is married to Tomoko Myint whose father Tom is Chinese and mom Yasuko is Japanese.  They have three beautiful daughters Mayako, Emiko and Aiko. 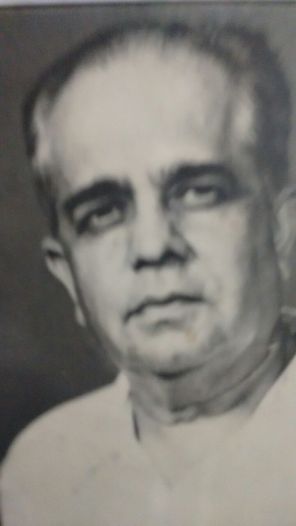 My father, Dr Arvind Talwalkar, son-in-law of Lt Col Sir Nilkanth Shriram Jatar (son of Shriram Jatar) went to Grant Medical College and passed his MBBS with medals in most of the subjects. He did his residency with Dr Parmar and then went to England and passed his FRCS at first shot, which was very rare for an Indian doctor.

He returned to India and practised General Surgery at KEM Hospital. There he met Dr Katrak, an orthopaedic surgeon and with his encouragement he went back to Liverpool and did his MCh (Master of Surgery) degree in Orthopaedics. He travelled to Mayo Clinic and also saw well known orthopaedic surgeons’ work in Paris. It is fair to say that he was the first well trained Orthopaedic Surgeon in India. Little wonder that he got very very busy and had patients from all walks of life. Politicians, actors, actresses, businessmen and so on. He was humble, hard working and always cheerful. I think when a person gets to do what he enjoys his work becomes play and it no longer stressful. He travelled abroad several times to learn the latest techniques in Orthopaedic Surgery.

He married my mother Leela Talwalkar née Jatar after he came back from the UK after completing his FRCS.

I was travelling from New Delhi to Pune by Indian Airlines and next to me was the famous actor Dilip Kumar. We started talking, and he learned that I was in Canada practising medicine. He asked me several questions about the medicines he was talking about keeping fit etc and when he learnt that I was AKT’s son he said oh I know your dad, he treated me for joint problems a few years back. I believe that was after my father had passed away and I was visiting my mother in Pune, probably in 1990 or so.

My father Dr Arvind K Talwalkar (AKT) did pioneering work in the field of orthopaedics and still I meet many of his students/acquaintances/patients who have tremendous respect for him. Even on international level he was respected in his field. Not only was he very bright,studious and hard working, he was helpful also. He was very interested in sports and could play bridge, table tennis etc very well. He also started scholarships.

Here is a photograph of AKT when he was young:

Jatar (nee Bhausaheb, son of Shriram Jatar) lost her own mother due to TB in infancy. She was looked after by her sister Indumaushi initially and later by her stepmother Jiji. My mother was tall, 5′4 inches according to her at least, very fair, and was slim and very pretty.  She was a beauty queen at Fergusson College.

My father, Dr Arvind Talwalkar, saw her once while riding his bike in Pune and instantly fell in love and requested Bhausaheb to allow him to marry her, but Bhausaheb said no, not so fast, you are going to the UK for FRCS, you go get your degree, and come back, then we will see.

My father, Dr Arvind Talwalkar, went to the UK, passed his FRCS in no time and returned. I wonder if you would call it lagna chi ghai? Anyway, they got married with Bhausaheb’s blessings. This was in 1937.  Later my father told us he married my mother because all the Jatars he met were tall that was the only way to make the next generation tall.

In my practice I have come across a dad who is 5′ 2 inches tall, married to a woman who is 4′ 11 inches, and their children come and want to check their heights as they are short. If you want to have tall kids marry a Tallwalkar, that is my answer and believe me many of these children have done so and have brought their spouse to see me.

Anyway, my dad worked hard with his practice and my mother worked harder to bring us up. She was very kind but very tough and we all knew it. She not only made us study hard but made her say subhashitas, Shotras like Ramraksha and we knew all the artis by heart. She was a great cook, a simple bhaji (vegetables) amti (lentils) and rice and chapati (flatbread) was like a gourmet meal. We never needed chutney or koshimbir (salad) to make food test better. We had strict rules as to when to get back home.

Therefore, when the other day one Indian couple came to me and said their daughter comes home at 2 or 3 in the morning and we cannot sleep because of worries, what should we do? I said you need to show tough love. Make it clear to your daughter that she has to come home before 9 or 10 or whatever time they the parents agree on and be firm as it is not negotiable. Coming home every day at 2 or 3 is unacceptable and do not feel bad about doing what is right for your children, be assertive.

I think my father was intelligent and hard-working but he was more motivated and driven by my mother. He trusted her completely. Behind each successful man, there is a woman and it was true in their case. My mother was brave like Bhausaheb, Babamama, and Annamama. She was braver than all of them in my opinion.

When Shrirang, my younger brother, was born in March of 1945 and had an infection in his hip joint, he needed penicillin. My father was in the UK doing his MCH or Orthopedic training and penicillin was not available in India so my mother took Ranjan age 6, me age 4 and Shrirang less than 1-year-old and went to the UK alone on a ship full of British soldiers, in 1946, prior to our independence, and treated Shrirang with penicillin. The treatment was by Prof Mcmurray the doctor who popularised Mcmurray Osteotomy. How many women could have done it? She saw to it that all of us graduated, got our degrees and led productive lives. A successful sansar (family) does not depend on how many crores you accumulate but what your children and grandchildren achieve.

(Prafulla has two brothers, Ranjan and Shrirang and a sister, Lata. Lata is married into the Chinchankar family and is known as Charu by friends)