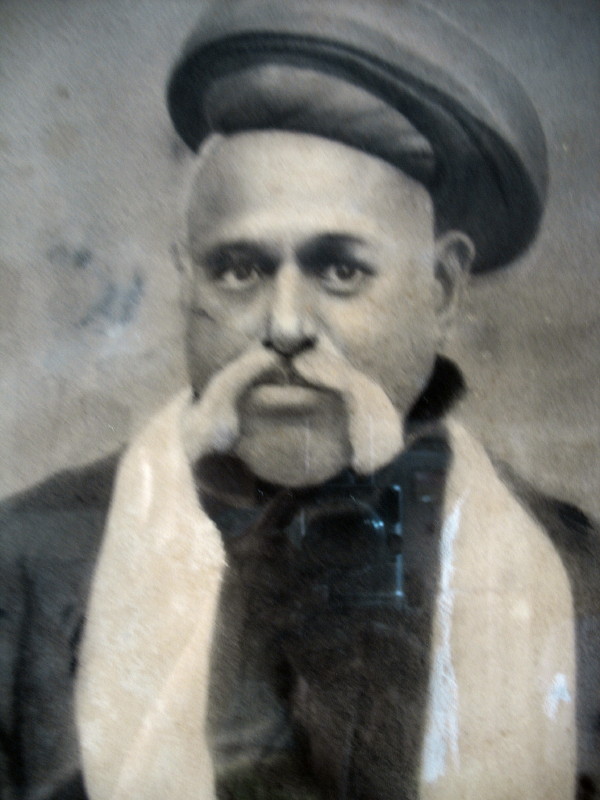 Shriram Bhikaji Jatar was born in Wai on 18 December 1838. His father Bhikaji Vishnu Jatar had married thrice. His first wife passed away childless. Shriram and his brother Damodar were from the second wife. On her demise, he married for the third time. Shambhu, Ramkrishna and Sadashiv were from the third wife. There is no record of any sisters of Shriram.

After completing schooling at Wai, and obtaining a scholarship, Shriram went to Pune for higher education. It appears that Shriram and Damodar were not very happy at Wai owing to stepmother’s pressure and left the house. After a few years, their father Bhikaji returned to settle down with family at our ancestor’s village Kanhe near Chiplun in the Konkan.

Shriram and Damodar both completed BA from Elphinstone College, Damodar securing a first-class in 1861. Shriram Bhikaji was the first graduate of the College and got a scholarship of Rs 5/-. Later he got a prize of Rs 51/- for Marathi translation of Thomas Gray’s ” Elegy in the Country Churchyard .” Here is a link to a Mumbai University calendar of 1865-65 which has a mention of Shriram Bhikaji Jatar. Apparently, he was a Law student and passed the first and intermediate law exams but did not complete his Law degree.

Shriram had a job as a translator exhibitioner and completed his BA while holding the job. Both had jobs in the Education Department. Shriram in Poona High School, then located in Vishram Baug Wada and Damodar in Satara High School, Satara where he rose to be the Head Master.

In 1866, the government-appointed Shriram as Deputy Education Inspector in CP & Berar. In 1868, when as Education Inspector in CP & Berar, he drew a salary of Rs. 200/- pm. In 1871, his superiors acclaimed his work of writing school textbooks in ‘modi’. In 1873, when the Department promoted him as the Headmaster of Amraoti High School, there were 37 students in the school and the average attendance was 27. Within one year of his appointment as Head Master, the school had 84 students with an average attendance of 66. The then Director of Public Instruction, Rao Bahadur Narayan Dandekar was full of praise for the annual report of the school given by Shriram Bhikaji Jatar. A letter written by an English senior officer Mr Lee Warner to Shriram, extracted below, is revealing:

“I may, however, express the pleasure which it has given me to make your personal acquaintance because I have found you invariably to be free from those faults, which, often and not without reason, are ascribed to an educated Native. In short, I may say that I believe you to be a thorough gentleman and incapable of doing a dishonourable act.”

Shriram’s quality of expressing his opinions freely without fear of offending the seniors endeared him to the English officialdom. Shriram rose rapidly in his profession until he became Director of Public Instruction of CP & Berar in 1884. The government conferred the title of Rao Bahadur in 1888 and the Companion of the Indian Empire (CIE) in 1894. A book called “The golden book of India: a genealogical and biographical dictionary of the ruling princes, chiefs, nobles, and other personages, titled or decorated of the Indian Empire” has a reference to this respected title. It mentions that Shriram got this title on the 1st of June 1888 in Akola, Berar.

He retired from service in 1894. Lord Kimberley applauded his work in the British Parliament.

Shriram had to struggle for seven years for not being paid the salary of Rs. 1000/-, which his English predecessor was receiving. He settled in “Shriram”, 388 Narayan Peth, Pune 411 030, which he had purchased earlier. On retirement, Shriram busied himself with social activities. He was one of the founder members of Deccan Vernacular Translation Society along with Justice M. G. Ranade and Sir Ramakrishna Bhandarkar. Shriram also stood for election as municipal councillor against Lokmanya Tilak, who incidentally was his tenant in “Shriram”, but lost quite badly.

Shriram had good relations with his brother and half-brothers. Dr Sadashiv remained a bachelor, migrated to England and practised medicine in Manchester or Liverpool for nearly 25 years. On his death, his estate was willed to Bapurao who utilised the proceeds to send his son Baburao (Shantaram) to England for higher medical studies.

Shriram died on 13 December 1899. None of us knows much about his personal characteristics except that he was a steady and sober family man, very successful in his chosen career. Shriram and his wife Janaki (nee Deo) raised a family of four sons and three daughters as shown in the family tree. The newspaper obituary below speaks for itself.