The Shriram Wada, a sprawling structure in the heart of Pune city, was bought by Shriram Bhikaji Jatar (SBJ) around 1890 on his retirement. It was bought from his own earnings. He did not receive any property from his father (Bhikaji). Shriram Jatar left this property to his sons and in the year 1927 approximately, Bapurao bought it from his brothers (a value of ₹20,000/- was placed on the Wada) after selling a property in Nagpur (documentation available with me.) After Bapurao’s death (1951), the Shriram Wada was sold.

It is a huge Wada with 3 floors and numerous rooms. It has entrances on two sides, as it straddles two lanes in Narayan Peth. There is a water well at the back. There used to be a cowshed with 3 or 4 buffaloes. The main entrance used to be from the north, but now it has been changed to the south. It used to be number 340, Narayan Peth, but now the number has changed to 387/388.

Lokmanya Tilak was a tenant here and the Wada has become known for this now.

Here are the photographs of the Wada. The front entrance has a board of the END_OF_DOCUMENT_TOKEN_TO_BE_REPLACED

Yashwant Bhagwat has sent in an article, which he wrote on Bapurao (Kashinath Shriram Jatar), and it was published in Maharashtra Times Pune on 10/10/17. Before I paste the article here, this is what he wrote to me (Nita) on email (by KS he means Bapurao and NS he means Bhausaheb).

My father always used to tell me about K.S. and N.S. Jatar. I unfortunately could not see K.S.Jatar in person but I have talked to N.S. Jatar when I visited Neelsadan. We feel that these people and their families acted like messengers of God. The very fact that I at 83 still remember the good deeds of Jatars shows that they were worthy of worship. Good people come into life do something good and fade away without ever advertising about their deeds and expecting anything in return.
Regards
Yashwant Bhagwat M.E ( Civil )

In a comment here at this link, he has also said: END_OF_DOCUMENT_TOKEN_TO_BE_REPLACED 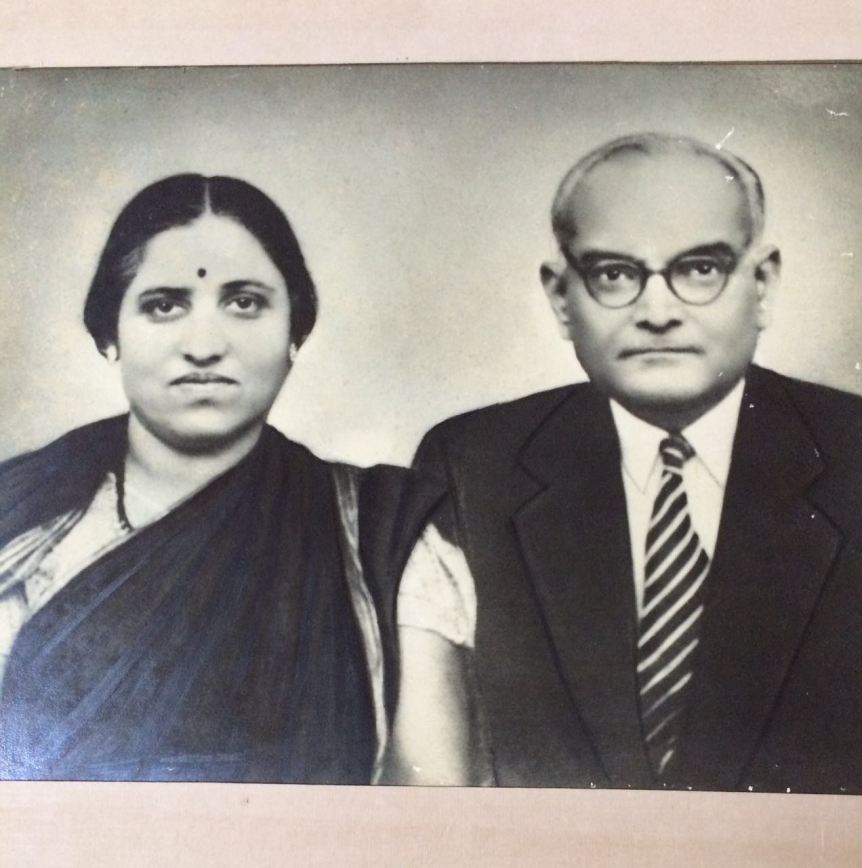 She was also very gentle and warm. She passed away when I was quite young so I don’t have too many memories of her. But I remember the big dabbas of ladoos she always had in the Nagpur kitchen

This is what Anjani Mangalmurti, Kamalatai’s first cousin’s daughter has to say about her:

Long ago, around 1953,we stayed with them in Nagpur, for a short time before my father was allotted a bungalow. They were kind and affectionate hosts. Papa as he was called by all, every evening gave us a tour of his beautiful rose garden, rose cultivation was his hobby. He had a collection of exotic roses! Tai Thakur and my mom were first cousins. Anjani

A link to a write-up by Sonavi on her grandmother: Memories of my grandmother.

A poignant poem by the eldest son of Shriram and Janaki, KS Jatar, otherwise known as Bapurao to his mother Janaki (also known as Aaisaheb) after she passed away in 1912, when she must have been nearing the age of 70. Janakibai or Aaisaheb survived for almost 20 years after her husband (Shriram) died at the age of 61, and looked after her large family of four sons and three daughters with a lot of love and care. Her loss was keenly felt by the whole family.

Her eldest son was 41 when he wrote this poem but even as a man nearing middle age, he was broken after his mother’s death as can be seen from this poem. He writes of the tragedy of her loss, remembers the variety of food she used to cook, and the love and support she provided to various members of the whole family.

A particularly poignant moment in the poem is when Bapurao writes that “you” (meaning his mother Janaki) promised to look after your daughter-in-law after “Bhau” went abroad, but your untimely death dashed all hopes. Here he is referring to Bhausaheb’s first wife Bhagirathi alias Durga, who unfortunately died prematurely in her early twenties.

This poem is on two sheets of paper written in Marathi and posted in two separate images. People from the Jatar family are all named here. It is sure to bring a tear to your eye. END_OF_DOCUMENT_TOKEN_TO_BE_REPLACED

Kashinath Shriram Jatar, the eldest son of Shriram Bhikaji Jatar was a great family man and great achiever as well. By nature he was kind and helpful, as this post illustrates.

In a book  called “The Course of My Life ” by CD Deshmukh, he mentions Bapurao and reveals his helpfulness. CD Deshmukh (Sir Chintaman Dwarakanath Deshmukh, CIE, ICS)  was an Indian civil servant, and the first Indian to be appointed as the Governor of the Reserve Bank of India in 1943 by the British authorities. Deshmukh was Union Finance Minister from 1950 until 1956

Here is excerpt from the book in image form:

This is the family tree, a very ancient one. before Shriram Jatar, and up till our last known ancestor – Krishnarao Jatar who is the last known ancestor of the Jatar family and probably lived (or was born) around 1700 in Kanhe, Maharashtra. As was the practice in those days only the male members of the family are represented here.

This is an image of the family tree drawn by hand by Bapurao in 1935. This is a photograph of the original document provided to me by Brig. R.V. Jatar. This tree is not the complete one (I will be posting the full tree by and by) but it gives a good picture of the ancestors of the Jatar family to about three generations above Bapurao. Please click on the document to see it better.

In a book called “The Course of My Life ” by  CD Deshmukh ( who was a distinguished member of the Indian Civil Service) there is a mention of Kashinath Shriram Jatar (Bapurao), my grand-uncle (grandfather’s brother).  This was probably the first time C. D. Deshmukh met Bapurao who later became a great friend of the Jatar family.

CD Deshmukh later became Finance Minister of India and resigned on the issue of Bombay in Maharashtra because Nehru was not agreeing to it. CD Deshmukh also served with Bapurao’s younger brother Bhausaheb also in erstwhile CP & Berar. There are photographs of CD Deshmukh in our family album.

This post is about how CD Deshmukh met Bapurao and the pleasant experience he had because Bapurao was most helpful to him. The excerpt from the book can be found here  and this is what he says about Bapurao: END_OF_DOCUMENT_TOKEN_TO_BE_REPLACED

I have many vivid memories of Bapurao, my uncle. Actually, my father Bhausaheb used to revere his elder brother. His word was ‘law’ to Bhausaheb and to all of us, naturally. He is the one who brought up the whole family and many sacrifices for it. If our family has done well, most of the credit goes to Bapurao for setting the correct precedents and inculcating the right values in us. He had stayed in Neel Sadan for about a month sometime in 1950 just before his death on 27 January 1951. He was nearing 80 and his regular schedule impressed me. He used to lunch at about 3 p.m. and we used to sit by if we were at home. He used to find difficulty chewing but always spoke with us and enquired after us. Those were really warm moments.
I remember the time when Bapurao died. As soon as the news came, Bhausaheb sent me to the GPO to call Babukaka at Hyderabad (?). I went on the cycle. We did not have a telephone at home those days.
I also remember my first taste of ‘gomutra’, etc, at ‘Shriram’ (388 Narayan Peth) at some religious function. It must have been 1947 or 1948.

Nothing much is known about his childhood, which he spent in the then CP & Berar with his father who was in the education department. Being the eldest son and with a large number of siblings after him who had to be looked after, his father (Baba) shrewdly interrupted his education and much against his will, prevailed on Bapurao to join the Covenanted Civil Service (CCS) at an early age of 22 years before he finished his graduation. His first posting was as an attaché to the Resident of Hyderabad, then based in Amraoti. He was married two years earlier to Uma Bhopatkar.

By the dint of his merit, he was elevated to assistant commissioner as this link shows

This is a sample of a page which mentions him from the above URL. 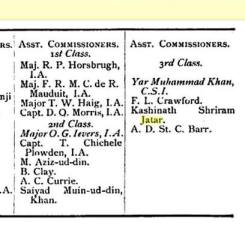 Young Bapurao imbibed a great deal from his father who taught him the ropes. After his father’s death in 1899, he looked after his mother (Aaisaheb) and his siblings. Guided by his mother and by dint of his efforts, Bapurao learnt to be a first-class administrator and acquitted himself very well in his professional as well as private life.

He was married to Uma Jatar née Bhopatkar and the couple had nine children – four sons and three daughters and had a fruitful and happy family life.

(Uploaded from the draft and family tree by Brig. (Retd) R. V. Jatar, the grandson of Shriram Jatar.  The book reference is by Nita Jatar Kulkarni who has compiled this post).